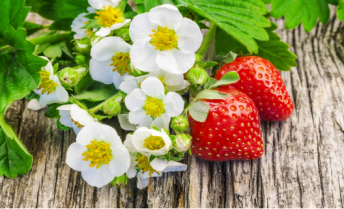 I wait impatiently for the strawberries to ripen in my shady garden each spring. Did you know that the ruby red “fruit” isn’t really a fruit at all? The fleshy edible part of this member of the rose family is actually the enlarged receptacle of the flower. Rich in antioxidants, it contains more Vitamin C ounce for ounce than oranges or grapefruit. Over the centuries strawberry hasn’t only been popular as a delicious food however. The ancient Romans used it to treat everything from melancholy to kidney stones. Madame

Tallien, a fascinating figure who lived during the reign of Emperor Napoleon, was famous for bathing in strawberry juice. Legend has it that this particular component of her beauty regimen involved over 22 pounds of the fresh fruit!

The common garden variety we enjoy today is a hybrid, but wild strawberries are native to temperate regions all over the world. On this continent the roots and leaves have long been used in traditional herbal medicine, and in some tribes the fragrant plant continues to play an important ceremonial role. Strawberry is considered one of the sacred life medicines of the Navajo, for example. The Kashaya Pomo, indigenous to the area we now know as California, still hold a Strawberry Dance celebrating the renewal of life each spring.

A staggering one billion pounds of commercially grown strawberries are picked every year in California today, making up at least 75% of the American market alone. According to a factoid from the University of Illinois, if every one of those strawberries were laid berry to berry they would circle the planet 15 times! The extended growing season south of our Canadian border makes importation attractive to those of us who would rather not wait for the availability of local produce. But there are other reasons for California’s stunning productivity well worth taking into consideration.

Conventional strawberry farmers have relied on huge volumes of poisonous gases to sterilize their fields before planting to ward off any threat of fungal disease that could compromise crop yields. For ye 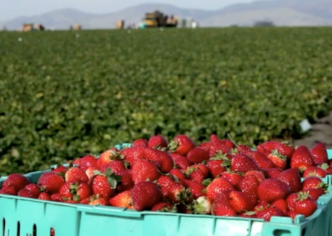 ars after the nerve gas methyl bromide was banned by the ‘Montreal Protocol on Substances that Deplete the Ozone Layer’, its use as a soil fumigant continued under a ‘critical use exemption’. Certified organic growers don’t fumigate, but these powerful chemicals are still employed in California nurseries that produce plants for both conventional and organic growers. Toxic alternatives to methyl bromide have also been dangerously problematic, still requiring significant buffer zones between applications to protect nearby buildings and people from exposure on standard farms.

The nonpartisan, nonprofit Environmental Working Group (EWG) ranks pesticide contamination annually in 47 popular fruits and vegetables grown in the USA. Testing involves washing or peeling foods first – just as a consumer would be expected to do. For the third year is a row, strawberries are at the top of their ‘Dirty Dozen’ list. Not surprisingly, industry argues that trace amounts of pesticide residue falling within the Environmental Protection Agency’s (EPA) recommended guidelines for safe consumption are nothing to worry about. But the EWG states that the EPA’s tolerance levels “are too lenient to protect public health.” New research shows that toxic chemicals can indeed be harmful in small doses, and particularly when people are exposed to combinations. One strawberry sample in the most recent EWG report was contaminated with residue from “22 different pesticides and breakdown products.”

The EWG advises consumers to always buy organically grown berries. They make the same recommendation for the rest of the fruits and veggies on their Dirty Dozen list. Organic practices favour soil health, biodiversity, and crop rotation over mono-cropping and egregious pesticide use (which also impacts wildlife, and puts farm labourers at risk of chronic health complications from asthma to cancer.) This means organic farming can be more labour intensive and require more land to grow produce in rotation with other crops in a more ecologically sustainable manner. Extra costs transfer to the conscientious consumers willing and able to support better farming practises. And leaders in the shift to organic production in California (like Swanton Berry Farm owner Jim Cochran) may also prioritize for a living wage for the workers in their employ. Migrant farm labourers in California (and beyond, including here in Canada) are well known to be overworked and underpaid on some large farms. It behooves all of us with the luxury of choice to be aware of the folks our grocery dollars may or may not be fairly compensating.

Of course now that strawberry season is upon us right here at home, it’s easy to resist the temptation of imports altogether. We can seek out certified organic growers at regional farmers’ markets and support their dedicated efforts directly. I’m thrilled to have a few plants of my own to enjoy for now, and here’s one way I plan to use them!

Directions:
Mix berry ingredients together and set aside. Preheat oven to 425 F. Combine dry ingredients for cake, add ‘butter’ with a pastry cutter. When mix is coarse and crumbly add curdled milk and stir until just combined. Roll dough on floured surface, cut biscuit rounds, brush with syrup and bake on parchment paper for 17-20 minutes. Serve at room temperature with whipped coconut and berries. Bon appetit!