Like a salmon swimming upstream, a bill that would ban whale and dolphin captivity in Canada is one leap closer to its goal. It’s taken nearly two and a half years to get this far, but on October 26th, Bill S-203 cleared the Senate’s Standing Committee on Fisheries and Oceans. It now goes back to the Senate for full deliberation and a third reading, then on to the House of Commons. Opposition definitely exists, so it is important that advocates for marine mammals let those in power know what we want from them! Thanks in part to the 2013 documentary “Blackfish” (now available on Netflix), more people than ever are aware of the tragic plight of cetaceans either captured in the wild or bred in captivity. Ongoing protests at theme parks and aquariums around the world signal a growing recognition that it is utterly inhumane to confine intelligent and socially complex creatures that belong in the wide open ocean in what are essentially cement pond jail cells. 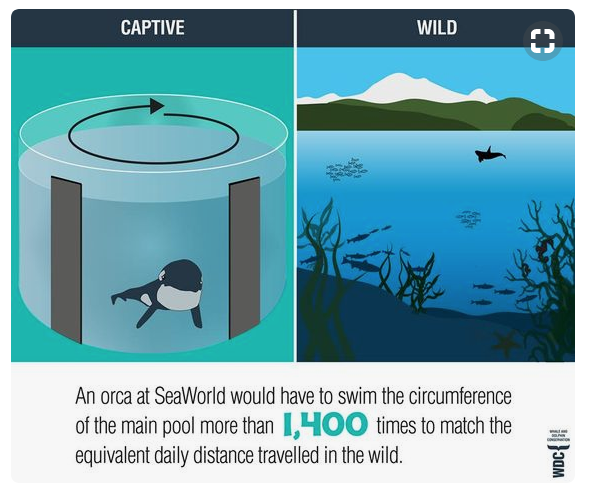 But what about species that don’t classify as charismatic megafauna? Motivated by the same criterion, wouldn’t it be morally consistent to also care more about the suffering of other aquatic creatures than we humans generally do?

Granted, acknowledging the unique personhood of an orca is easier than feeling fondness for a moray eel. Unless of course you’ve established a personal relationship with said fish, which is exactly what Valerie Taylor did over the course of many years diving in the same spot to visit her unusual friend ‘Honey’ near Banda Island in Indonesia. Likewise, since diver Hiroyuki Arakawa nursed an ailing Asian sheepshead wrasse off the coast of Japan back to health, the bond established between man and fish (he named her ‘Yoriko’) has lasted over 25 years! ‘Tracker‘ is the aptly named blood parrot cichlid who now lives in the aq

uarium at Van Isle Veterinary Hospital in Courtenay. Not only does this curious fish fix his gaze on clinic staff until fed each morning, he is famous for tracking visitors in the waiting room even when food is not on his mind. One blood parrot cichlid owner I found on YouTube discovered that this amazingly aware swimmer also delights in physical interaction. And so he routinely provides the kind of hands-on affection for his companion fish that most of us reserve for an appreciative cat or dog! It seems that our capacity for compassion and our ability to recognize the intelligence of underwater species are really only limited by our willingness to learn about and respect them as individuals.

We are easily overwhelmed by the difficulty of distinguishing one from the other in a school of fish. However, scientific studies compiled by ethologist and author Jonathan Balcombe in “What a Fish Knows” (2016), corroborate the anecdotal evidence that fish do indeed have distinct personalities, amazing memories and intelligence, develop lifelong bonds, feel pain and actually experience a wide range of emotions. Research published last year in the journal “Royal Society Open Science” concerning the high number of what are referred to in the aquaculture industry as ‘drop out’ salmon on fish farms in Norway, actually talks about fish “depression.” It’s obviously a financial liability when fish grown for the marketplace stop eating, become stunted and morose, then die prematurely. Noting what the study refers to as “sad” behaviour, the research team took measurements of cortisol production and elevated brain serotonergic activation – “both of which are common in humans that experience chronic depression or in other animals that have been exposed to long periods of stress.” They found both present in the ‘drop out’ salmon, suggesting (according to the report) that the fish became “listless due to overexposure of stimuli and other stress factors.” Balcombe names the str

ess of permanent confinement, the possible boredom of swimming in endless circles – unable to escape bigger, more aggressive fish and even get enough food to eat, and the heavy load of pesticides (used “because of the rampant parasites that can flourish in these intensive confinement situations”) as ample conditions for severe depression.

It has long since ceased to benefit our humancentric interests to think erroneously of fish as vacuous beings incapable of suffering, and/or simply unworthy of better care and attention. According to the World Wildlife Fund, “the amount of fish in the oceans has halved since 1970, in a plunge to the “brink of collapse” caused by over-fishing and other threats.” Can new understandings about the nature of fish help counter the alarming trajectory we are on? For the sake of wild salmon, endangered orcas and the entire web of life that revolves around them, the eradication of fish farms on our BC coast is imperative. Let’s just not delude ourselves with the notion that shifting these factory farms from the water onto land is less ethically problematic than continuing to hold whales and dolphins captive, or subjecting any other sentient beings to cruel confinement.
…………..

Did you know that you can get 2 grams of Omega-3 ALA by eating just 4-5 English walnuts? If you’re a fan, I think you may just enjoy my favourite fall veggie burger recipe!

Whisk ‘egg’ and set aside. Boil lentils in 2 cups of water for about 25 minutes, rinse and cool. Toast walnuts on parchment at 350 F for about 12 minutes, then cool. Blend garlic, walnuts, toasted bread and seasonings in food processor. Add oil and lentils and pulse until coarsely chopped. Add ‘egg’ and pulse again. Divide into four patties and bake at 350 F for approx. 20 minutes on each side. Serve with traditional condiments on a bun. Bon appetit!